Our research group will be focusing on a wide range of topics on atmospheric chemistry and climate modeling, including:

Here are some topics that we have done/currently work on:

Surface ozone air quality over China. Our analyses reveal that China has become a global hotspot of surface ozone pollution, with the summertime ozone air quality metrics, human health metrics, and vegetation exposure metrics significantly higher in China compared to other industrialized regions (Japan, South Korea, Europe, and US). [ES&T Letters, 2018] (News report by NOAA and German Julich (in German)), and shows the fastest ozone increases compared with the urban ozone trends in any other region worldwide reported in the Tropospheric Ozone Assessment Report (TOAR) [ES&T Letters, 2020] (Adopted by 中国大气臭氧防治蓝皮书(Fig 2.12, Page 18)). We use high-resolution GEOS-Chem simulations to quantify the natural and anthropogenic sources contributing to surface ozone over China in 2016-2017, and attribute the ozone increases in 2017 to higher background ozone driven by the hotter and drier weather conditions [ACP, 2019]. 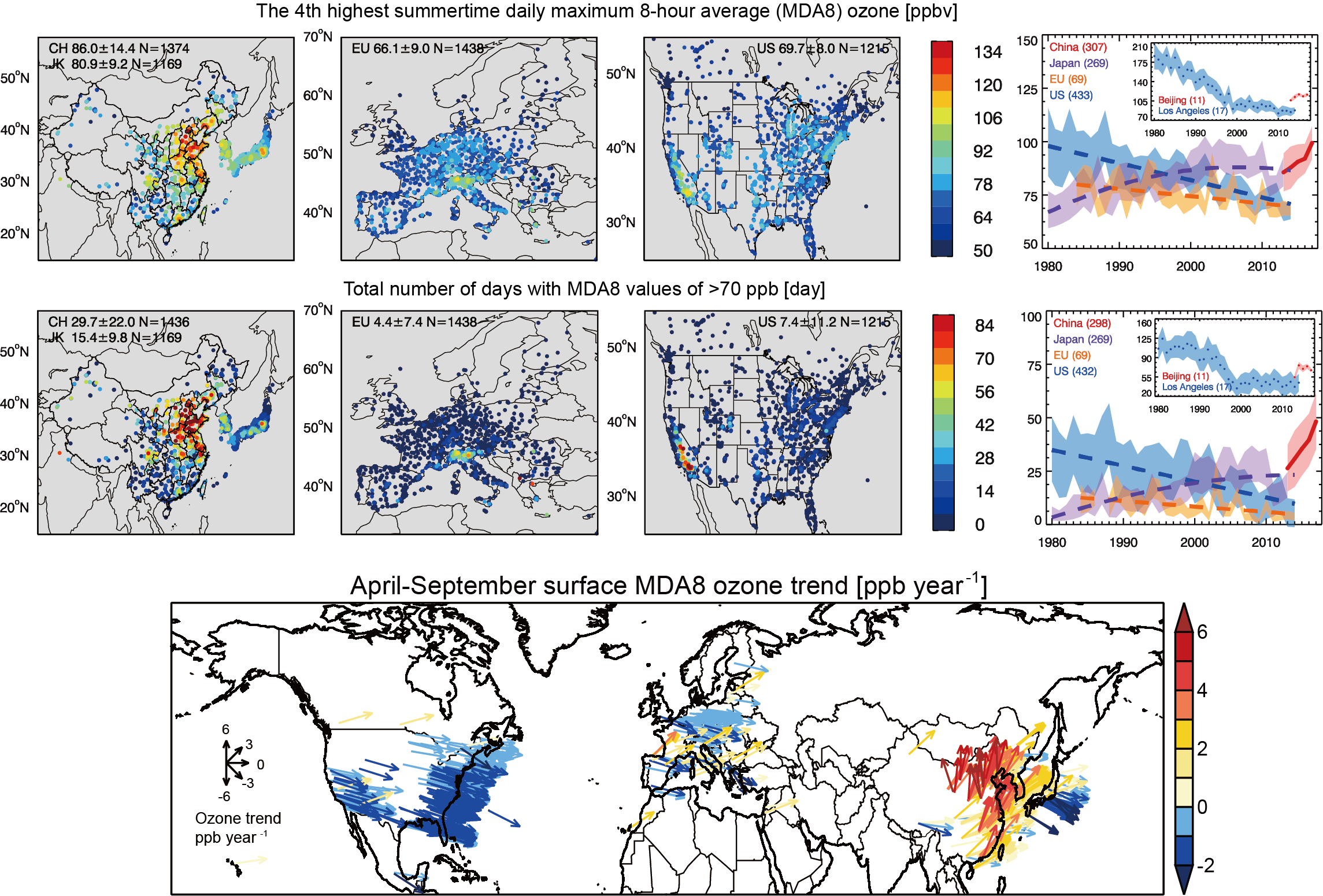 Wildfire influences on the variability and trend of summer surface ozone in the mountainous western United States. We develop a new method to estimate wildfire ozone enhancement over the western US during 1989-2010 based on backward trajectory model and statistical model. The figure shows that wildfire has a large impact on the number of high ozone episodes (MDA8 > 70 ppbv) over the 13 CASTNet sites in the western US. We also explore the possible limitation of Eulerian chemical transport models (e.g. GEOS-Chem) on wildfire chemistry simulation. [ACP, 2016]

Global methane budget and trend from analytical inversion of in situ and sateliite methane observations. We design a novel analytical inversion framework to compare and combine the information content from the GOSAT satellite data and global in situ (including surface, tower, shipboard, and aircraft measurements) methane observations, and apply it to quantify and attribute the global sources, sinks, and trends of atmospheric methane for 2010-2017. [ACP, 2021]

Ozone in the Southern Hemisphere tied to climate variability. We show that in-situ and satellite observations document increases of tropospheric and surface ozone in the Southern Hemisphere (SH) over 1990-2015, and by comprehensive model simulations we explain the trends are linked to the poleward expansion of the SH Hadley circulation (SHHC). The SHHC poleward expansion allows more downward transport of ozone from the stratosphere to the troposphere at higher latitudes, and also enhances tropospheric ozone production through stronger lifting of tropical ozone precursors to the upper troposphere. Poleward expansion of the SHHC is an expected consequence of greenhouse warming, and the associated increase in tropospheric ozone potentially provides a positive climate feedback amplifying the warming. [Science Bulletin, 2019] (Journal Highlight Article)(Research highlight comment by Dr. Owen Cooper) 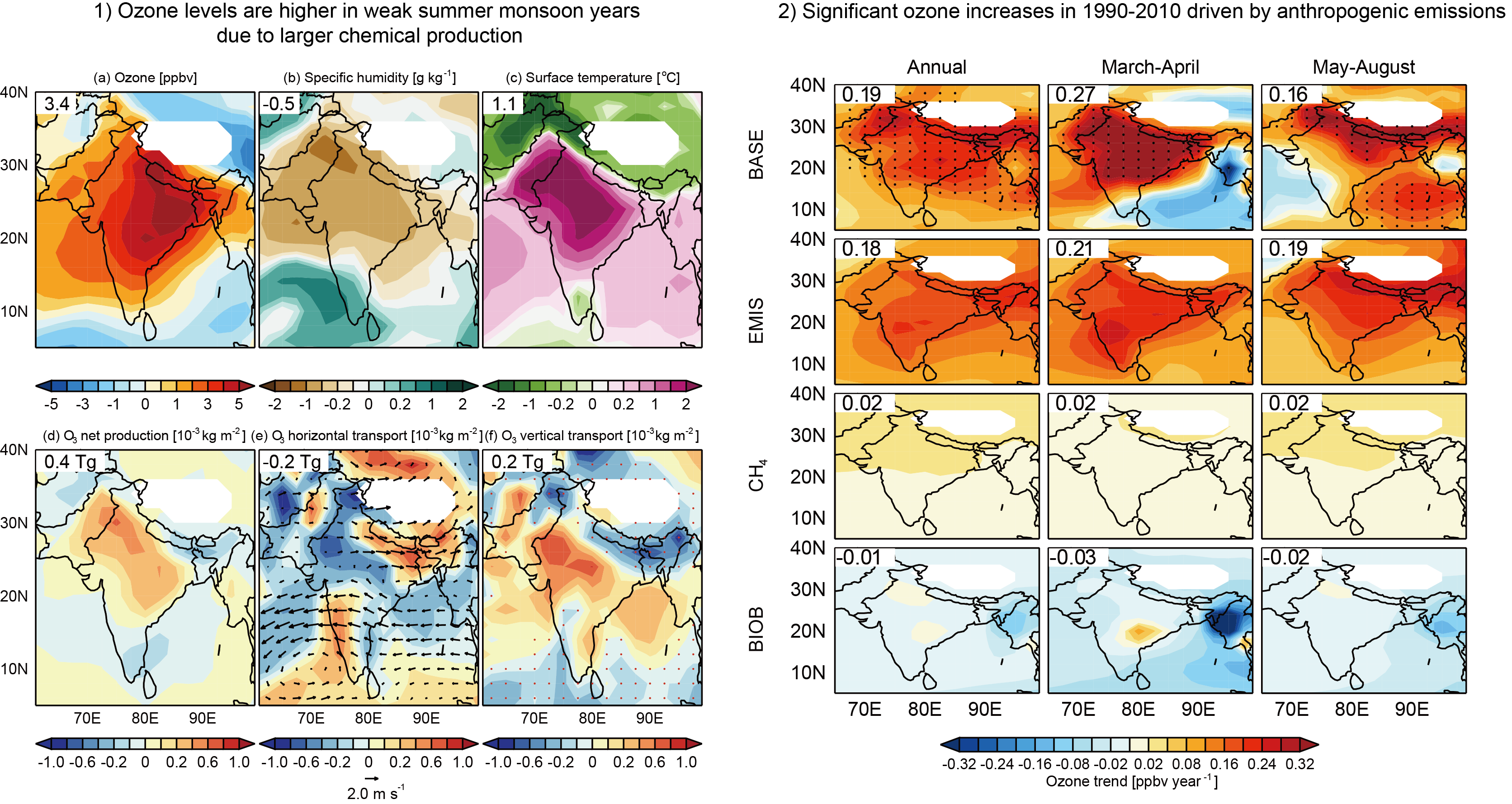 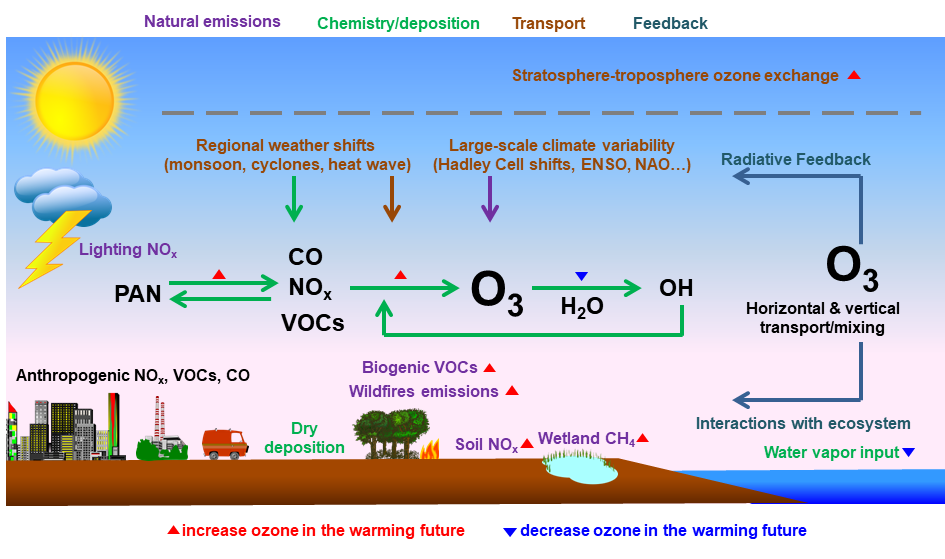